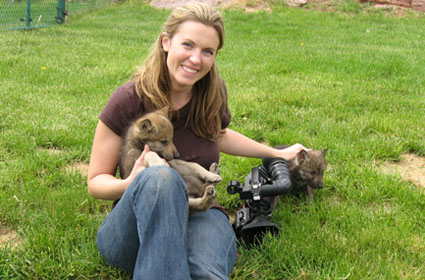 Kelly Sweet is an Emmy Award-winning producer whose passion for storytelling, animals and children’s entertainment has taken her around the world to capture incredible footage of gorillas in the Congo, flying snakes in Malaysia, and giant salamanders in Japan.

In 2016 Kelly was thrilled to combine her interests to launch Red Rock Kids – a division of the wildlife and science film company Red Rock Films. As Executive Producer Kelly spearheads development and programming of science- and nature-based content for multiple formats and series across cable and digital.

In her early work at WGBH/PBS Kelly also worked on the highly acclaimed NOVA series and several Emmy Award-winning children’s animated and live-action programs including Arthur, Between the Lions, ZOOM, Time Warp Trio, Curious George and Peep and the Big Wide World.

“To live will be an awfully big adventure” -Peter Pan